Brigid of Kildare is patroness for Brigidine College, Indooroopilly and for those who have a care for the earth, for justice and equality, for peace and reconciliation. She is a model for a contemplative life.

St. Brigid, the patroness of Ireland, is one whose life has relevance and inspiration, especially as we try to face the issues that confront our world currently. When we look at the life of Brigid and at some of these issues, we can see more clearly why she continues to be relevant today.

Carer of the Earth

Brigid, in keeping with her Celtic tradition, was wonderfully attuned to the seasons and cycles of nature. She valued the elements of nature: earth, air, fire and water.

Many of the stories about Brigid tell of her milking the cows, churning the milk, making up the firkins of butter, shepherding her flocks of sheep, helping with the harvest and even brewing the ale!

We are aware of the fragility of our planet; bare and barren lands, polluted air, poisoned waters, damaged ecosystems and the threats these present to humans and other species.. Many individuals and groups concerned about the environment draw inspiration from the reverence and respect which Brigid had for the land. She is often referred to as the saint of agriculture.

The Irish monk, Cogitosus who wrote ‘A Life of Brigid’ (Vita Brigitae) in 650 AD, places great emphasis on Brigid’s faith, her healing powers, her hospitality, her generosity, her great skill with animals, and above all her compassion for the poor and the oppressed. Twenty-three of the thirty-two chapters relate her extraordinary concern for the poor.

The following story of Brigid illustrates many of her qualities.

One day when Brigid was on a long journey she stopped to rest by the wayside. A rich woman heard about this and brought her a beautiful basket of choice apples. No sooner had she received them than a group of very poor people came by and begged her for food. Without a moment’s hesitation, Brigid gave them the choice apples. The rich woman complained to Brigid, ‘I brought those apples for you, not for them.’ Brigid’s reply was: ‘What is mine is theirs.’

This Brigid legend poses a challenge to us to work for a more equitable distribution of the world’s resources, a challenge to a world where thousands die daily from hunger or hunger-related diseases or lack of clean water. Some 20% own and consume about 80% of Earth’s resources. The poverty gap continues to widen both within and between countries.

It is generally accepted that Brigid established her abbey and church in Kildare c.470, on the site now occupied by St Brigid’s Cathedral. Brigid held a unique position in the Irish Church and in the society of her day. As Abbess, she presided over the local Church of Kildare and was leader of a double monastery for men and women.

Tradition suggests that she invited Conleth, a hermit from Old Connell near Newbridge, to assist her in Kildare. Cogitosus says: “they governed their Church by means of a mutually happy alliance.”

What emerges from many of these stories and legends about Brigid is the portrait of a strong and gentle woman, a powerful leader, a good organiser, a skilful healer and a wise spiritual guide. Brigid has become – for men and women – a potent symbol of Christian womanhood and the feminine face of God.

There was no lack of domestic strife in Ireland in Brigid’s time. Feuds between clans were commonplace. She is often depicted as a peacemaker who intervened in disputes between rival factions and brought healing and reconciliation. Folklorists tell us that in some parts of Ireland a Brigid’s cross was often used as a token of goodwill between neighbours, indicating a desire for peace and friendship after a local quarrel.

One of the best-known stories associated with St Brigid is that of her giving away her father’s precious jewelled sword to a poor man so that he could barter it for food to feed his family. Thus, a sword, a weapon of war, was transformed into a life-giving instrument, turning a ‘sword into a ploughshare.’ This story offers an important lesson for today when millions of dollars are spent on weapons of war.

Brigid emerges as a woman of action in the stories, legends and poems about her. If however, one were to seek the source from which she drew her strength and energy, one could probably find the answer in this old Irish poem, written in the seventh century, that speaks of her contemplation of the Trinity:

“Deeper than the seas
Greater than words can express
Three persons in one only God
Overflowing with wonder.”

Even today poets, writers and artists still find inspiration in the symbols, customs and folklore surrounding Brigid. One writer referred to her as: “the woman who, above all others, embodies the spirit of pre-Christian and Christian Ireland.” P.J Brophy (Nenagh Guardian).

In a beautiful leadlight window in our College overlooking St Brigid’s Well, the artist depicts Brigid dancing the dance of the new life of creation, carrying the Spirit of Jesus into the twenty-first century.

The lead light windows in the Brigidine Chapel share a little of the sisters’ story, depicting their journey and the symbols significant to the College.

Brigid died at Kildare on 1st February 525. She was laid to rest in a jewelled casket at Cill Dara. In 835, her remains were moved from Kildare to protect them from Norse invaders. She was interred in the same grave that holds the remains of St Patrick and St Columcille at the Cathedral grounds in Downpatrick. There are different spellings to her name – Brigit, Bridget, Bríd, Bride. She is also known as “Mary of the Gael.” (Mary of the Irish). Brigid’s Feast Day is on 1st February.

So strong is the respect and reverence for this holy woman that she is the patroness of many parishes, towns and counties, not only in Ireland but across Australia, Europe, America, and New Zealand. Brigid’s cross is universally recognised. 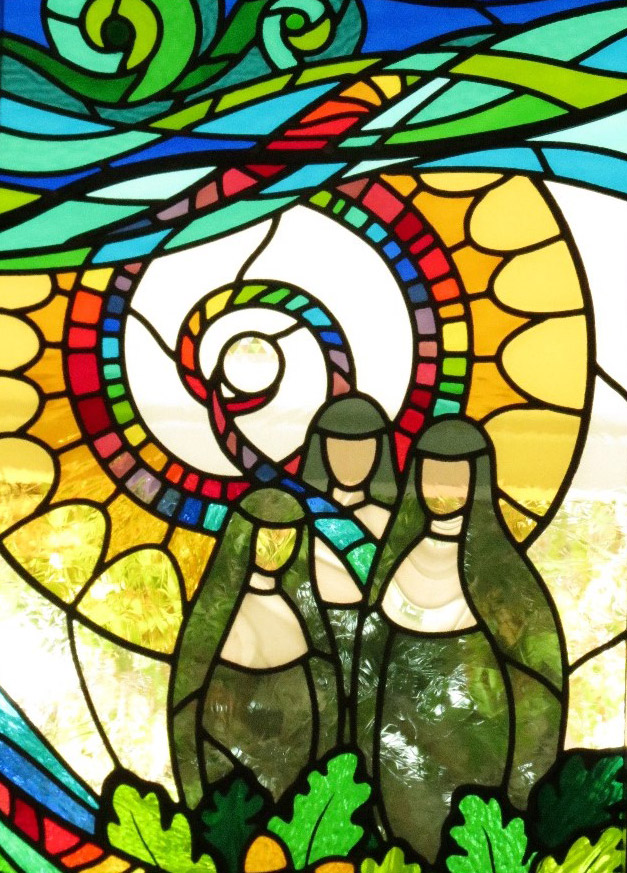 Many of the values associated with Brigid are captured in this delightful poem.

Lady, from winters dark
Star of Imbolc*, rise!
Dance around our threshold
Scattering warm laughter
Seeds of hospitality
Tolerance, forgiveness
Return again to the fold
You the spring we yearn for!

*Imbolc is one of the four principal festivals of the Celtic calendar, celebrated on 1st February.

Brigidine College is the only independent all girls’ Catholic secondary College in the Brigidine tradition in Brisbane. Founded in 1929 and located at Indooroopilly, just 8km from the CBD, Brigidine has an outstanding reputation for high-quality teachers, a welcoming community and alumnae who have carved out meaningful careers locally and internationally.

Brigidine College acknowledges the Jagera and Turrbal people as the traditional owners of the land. We promise to walk together in a spirit of reconciliation.